Here is my setting of the response for the Psalm for today, which I will be leading in St Patrick's Cathedral here in Melbourne.

Singing at Mass on 4th Sunday in Lent Year C

I'm on the roster again this week in my local parish. All inspired by Sacramentum Caritatis, imagining Gregorian Chant and music fitting for the great mystery of the Mass, I now have to come down a notch or two to the real world.

So, here's what I've chosen for Mass on Sunday and why:

Yep, I know that chosing this one breaks just about all my own personal rules for chosing a parish repertoire--especially the rule about not using songs that have Us pretending to be God singing to Us. So why have I chosen it? It's well known, it was used by the group on the roster last week, it fits with the readings.

This one is an Australian classic. It is a very dignified, simple and noble settiing.

I like Herry's stuff. It is as good as Taize. Again, simple and dignified. This one is Eucharistic and picks up the themes in both the Old Testament reading and the Gospel.

This is a simple responsive setting, which works well given that I have no accompaniment. By the way, our new priest has decided that we should really have only three parish mass settings at the most. I tend to agree. Just which three will he chose and on whose advice though? It would be a good exercise to see what three readers of this blog would choose. If I had my own way? I would see to it that the parish knew at least one simple Gregorian setting (similar to that which is printed in our missals). Then probably the Jubilee Mass or Mass Shalom, since these are just about universal in Australia. And then it would be by popular vote which came next.

This is a Eucharistic repeating refrain with verses sung over the top. I agree with those who believe that the communion hymn should be simple for folk to be able to sing as they are processing to receive communion.

Yes, go ahead, groan. Its not my favourite hymn either, but it is a favourite of lots of folk, and (get this) we NEVER sing classical style hymns at my local parish. So I am sneeking this one in at the end just for the sake of singing something that's more than 40 years old. I am sure that Pope Benedict did not have this hymn in mind when he was talking about the 2000 year old patrimony of the Church's music, but it's there anyway. And it fits with the story of the prodigal son. By the way, we change the second line from "a wretch like me" to "and set me free".
Posted by Schütz at 11:49 pm 1 comment:

Here is the antiphon I have prepared for Mass this Friday (3rd Week in Lent) in the Cathedral.

Posted by Schütz at 7:24 pm No comments:

There is joy for the musical in the Holy Father's latest apostolic exhortation "Sacramentum Caritatis". Here it is:

42. In the ars celebrandi, liturgical song has a pre-eminent place. (126) Saint Augustine rightly says in a famous sermon that "the new man sings a new song. Singing is an expression of joy and, if we consider the matter, an expression of love" (127). The People of God assembled for the liturgy sings the praises of God. In the course of her two-thousand-year history, the Church has created, and still creates, music and songs which represent a rich patrimony of faith and love. This heritage must not be lost. Certainly as far as the liturgy is concerned, we cannot say that one song is as good as another. Generic improvisation or the introduction of musical genres which fail to respect the meaning of the liturgy should be avoided. As an element of the liturgy, song should be well integrated into the overall celebration (128). Consequently everything – texts, music, execution – ought to correspond to the meaning of the mystery being celebrated, the structure of the rite and the liturgical seasons (129). Finally, while respecting various styles and different and highly praiseworthy traditions, I desire, in accordance with the request advanced by the Synod Fathers, that Gregorian chant be suitably esteemed and employed (130) as the chant proper to the Roman liturgy (131).

62. None of the above observations should cast doubt upon the importance of such large-scale liturgies. I am thinking here particularly of celebrations at international gatherings, which nowadays are held with greater frequency. The most should be made of these occasions. In order to express more clearly the unity and universality of the Church, I wish to endorse the proposal made by the Synod of Bishops, in harmony with the directives of the Second Vatican Council, (182) that, with the exception of the readings, the homily and the prayer of the faithful, such liturgies could be celebrated in Latin. Similarly, the better-known prayers (183) of the Church's tradition should be recited in Latin and, if possible, selections of Gregorian chant should be sung. Speaking more generally, I ask that future priests, from their time in the seminary, receive the preparation needed to understand and to celebrate Mass in Latin, and also to use Latin texts and execute Gregorian chant; nor should we forget that the faithful can be taught to recite the more common prayers in Latin, and also to sing parts of the liturgy to Gregorian chant. (184)

There is also little note about the Post-Communion Hymn which supports the general gist of Elizabeth Harrington's advice, and yet corrects her to a certain degree also:

Furthermore, the precious time of thanksgiving after communion should not be neglected: besides the singing of an appropriate hymn, it can also be most helpful to remain recollected in silence. (152)

Here is an antiphon for Psalm 105 (104). It is set down for today, the Friday in the Second Week of Lent. I will use it in the Cathedral today at 1pm mass after the Stations of the Cross.

Here is the psalm setting for Psalm 130 (Psalm 129 in the old money) which I prepared for singing in the Cathedral today. It is based on Martin Luther's Chorale "Aus Tiefer Not", which is, I think, one of the most poignant renditions of this psalm in the Church's history. 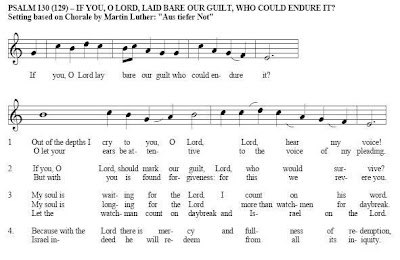 Posted by Schütz at 2:13 pm No comments:

Use of My Hymns and Copyright

All my verse on this blog is copyright. BUT you can use it for free on the following grounds:

1) You reprint it with the text: "© David Schütz (singlustily.blogspot.com). Used with permission."

2) You let me know that you are using it and how you used it in the comments at the bottom of the blog from which you took the hymn.

3) You don't change any of the words. If you can think of any improvements, please let me know in the comments at the bottom of the blog.

Schütz
I am Catholic, married to Cathy, father of Maddy & Mia. Since 2002, I have been the Executive Officer of the Ecumenical & Interfaith Commission of the Archdiocese of Melbourne. I was once a Lutheran pastor, but a "year of grace" and soul-searching led me into the Catholic Church. It was a bumpy ride, but with the support of my (still Lutheran) wife, I was finally confirmed on June 16, 2003.